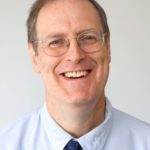 Bill English is on the faculty of the Economics and Finance departments at Yale University.  He teaches and conducts research on monetary policy and central banking issues. Before coming to Yale, Bill worked for more than 25 years at the Board of Governors of the Federal Reserve System in Washington, DC. While living in the Washington DC area, Bill was on the Vestry of Christ Church Georgetown and was head usher of the family service there for more than 15 years. He and his wife Tracey live just a few blocks from St. Thomas’s. They have two sons, now 27 and 22, who live in Arlington, Virginia. Bill received a BA in economics and mathematics from Yale University in 1982 and a PhD in economics from the Massachusetts Institute of Technology in 1986.